A correction event now almost in its third month is frustrating many, but conditions may soon be right for a fresh charge against opportunistic bears, an increasing number of analysts are saying.

With inflation running hot and United States lawmakers set to make the Bitcoin mining debate public this week, there are plenty of potential pitfalls in store.

Nonetheless, it’s beginning to feel like Bitcoin is at the point where it is capable of producing a classic surprise when the majority of the mainstream economy least expects it.

Cointelegraph takes a look at five factors worth paying attention to when charting BTC price action over the coming week.

After a rangebound weekend with little unique price action, BTC/USD is putting in lower lows on short timeframes while avoiding key zones around $44,000.

With Wall Street closed for a holiday, Monday could shape up to offer more of the same before markets provide direction.

Bitcoin did, however, manage to close out the week at exactly the crucial point identified by trader and analyst Rekt Capital as useful for aiding bullish momentum.

“A Weekly Close above ~$43100 (black) would be a good sign of confirmation for BTC to continue higher from here,” he wrote Sunday alongside an accompanying price chart. 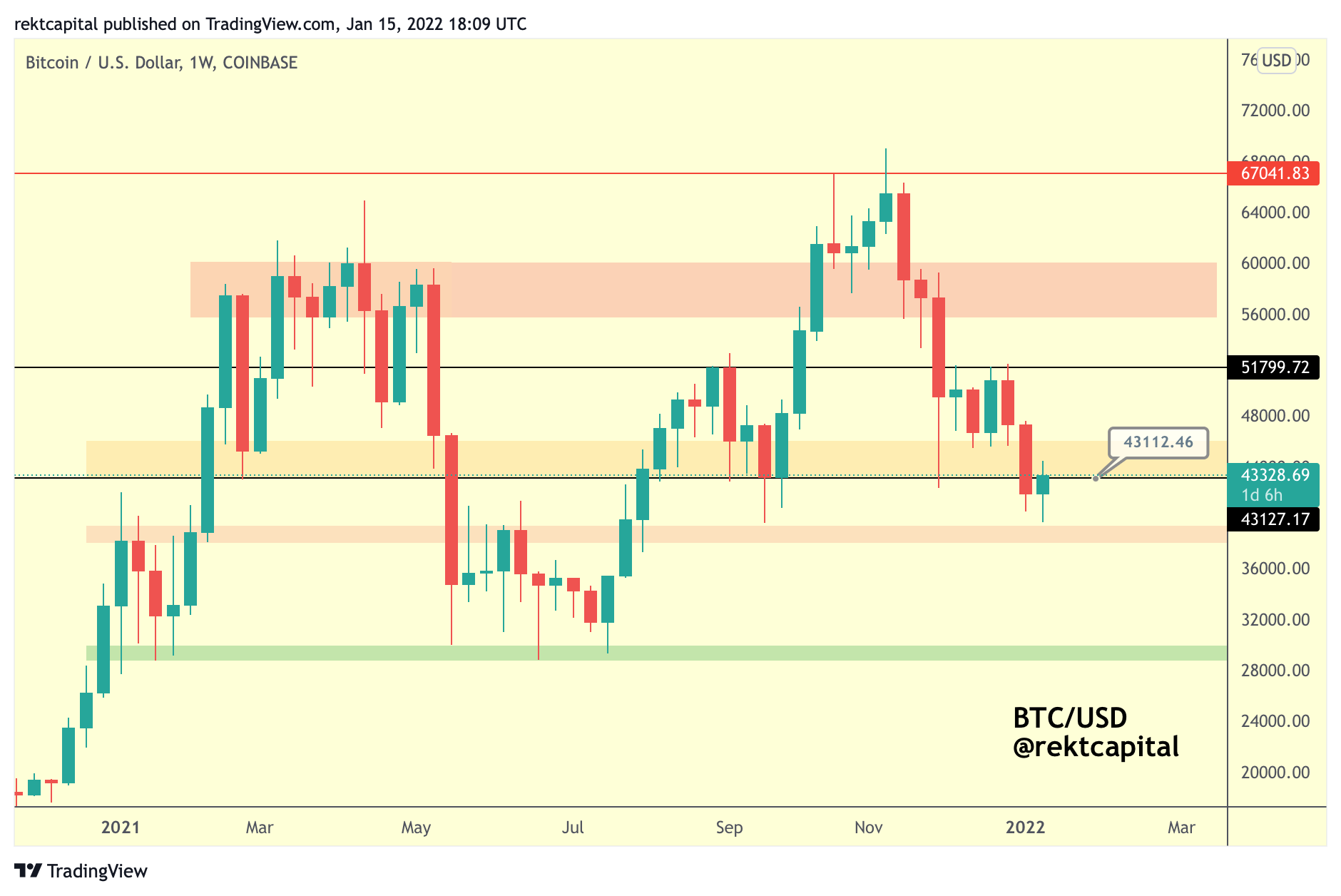 A subsequent dip took the largest cryptocurrency lower, with $42,337 on Bitstamp the local floor for Monday at the time of writing.

Also cautiously optimistic is fellow popular trader Crypto Ed, who is eyeing a potential replay of last week’s run above $44,000, something that bears subsequently quashed.

“Although it’s early but this looks like the start of continuation of last weeks move. Fingers crossed!” he summarized in part of his latest Twitter update.

Last week, meanwhile, Cointelegraph reported on sentiment favoring an upside breakout as an eventual outcome of the current ranging behavior.

The “stage is being set” in more ways than one this week as the topic of inflation returns to haunt U.S. markets and politics alike.

Amid a fresh flurry of headlines about how inflation is hitting consumers, the highest consumer price index (CPI) print in 40 years is already hitting President Joe Biden’s approval ratings.

“The stage is being set in the coming weeks,” Pentoshi argued.

With a significant chunk of the Bitcoin hash rate now coming from the U.S., any hostile policies will matter more than most when it comes to sentiment. A repeat of the China exodus from May 2021 — and its knock-on effect for hash rate and network security — will not be welcomed by anyone.

The Oversight and Investigations Subcommittee hearing is due to take place on Thursday, and is titled “Cleaning Up Cryptocurrency: The Energy Impacts of Blockchains.”

The hearing will be livestreamed in real time on the day.

Bitcoin “a bonfire covered in gasoline”

Bitcoin volatility is plumbing multi-year lows — encouraging for its acceptance as a mainstream asset, but not something many expect to last.

According to the Bitcoin Volatility Index, which calculates the standard deviation of daily BTC returns for the last 30 and 60 days, Bitcoin is at its least volatile since November 2020 at 2.63%.

Current price movements are thus similar to before BTC/USD entered price discovery after cracking its $20,000 all-time high from 2017.

For trader, entrepreneur and investor Bob Loukas, the stage is now set for a potential repeat of those events.

“Remember when everyone was loading up BTC options in Sept/Oct for the super cycle. Those are probably down 80+%,” he commented, noting that derivatives traders from before the current $69,000 all-time highs are likely more than disappointed. 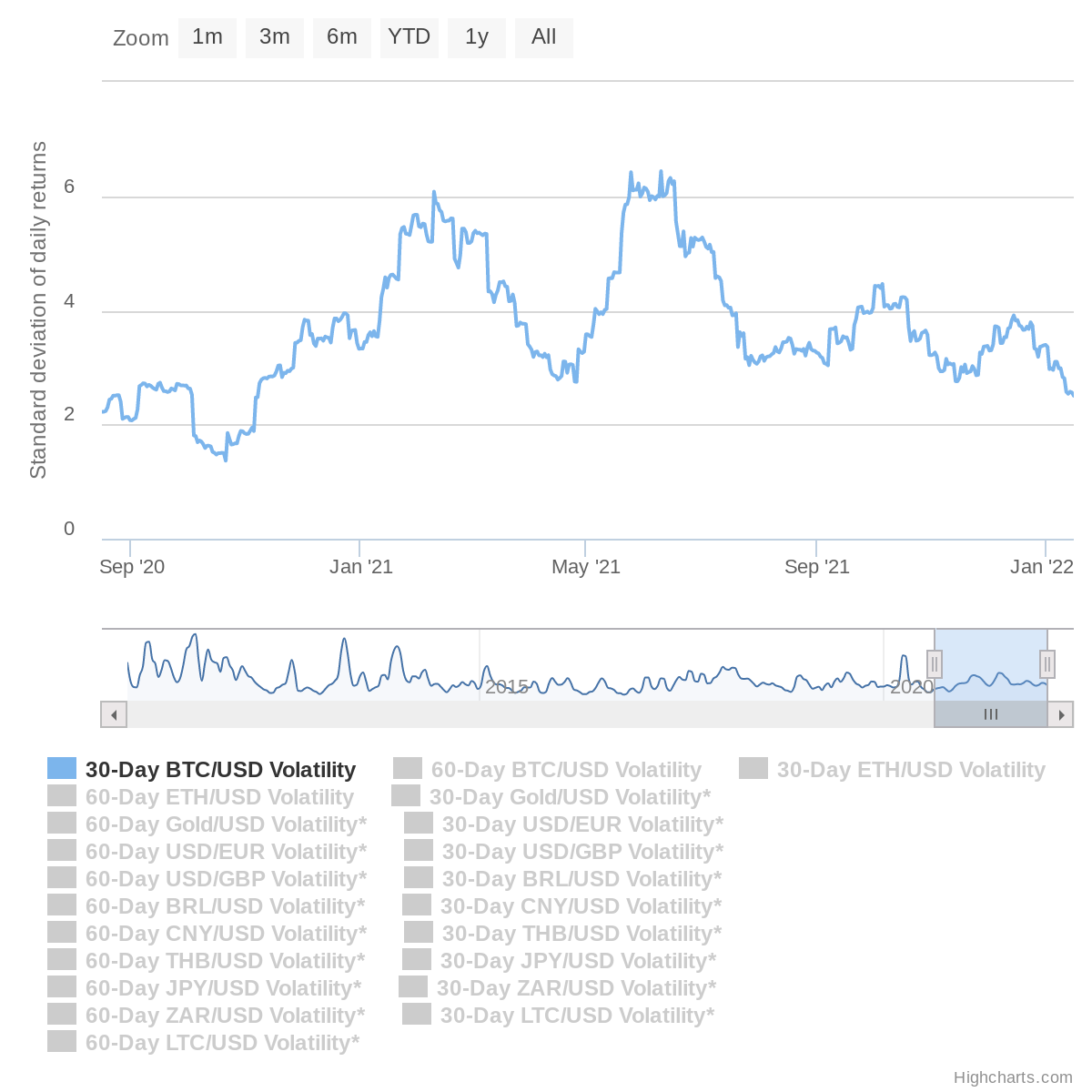 While “exciting” price moves are yet to reappear after December’s drawdown, however, they are now all the more likely thanks to Bitcoin’s supply becoming increasingly inaccessible.

“With illiquid supply at ATH’s for this cycle, Bitcoin is essentially a bonfire covered in gasoline,” market commentator Johal Miles argued.

“The slightest whiff of demand will bring roaring flames.”

As Cointelegraph reported, BTC is being ferreted away into cold storage out of the grip of speculators.

Interest “quiet ever since” early 2021

Amid questions over the absence of retail investors even after a 40% price drawdown, new data shows that the sector has in fact had little interest in Bitcoin for an entire year.

Eyeing new entities appearing on the blockchain, Glassnode analyst TXMC Trades showed just how quiet Bitcoin has really been in terms of retail adoption since January 2021.

A look at the 30-day exponential moving average (EMA) of new entities coming on chain reveals that the last major surge ended at the start of Q1 last year.

“…Activity wise, the last bull run ended in January 2021. It’s been quiet ever since.” 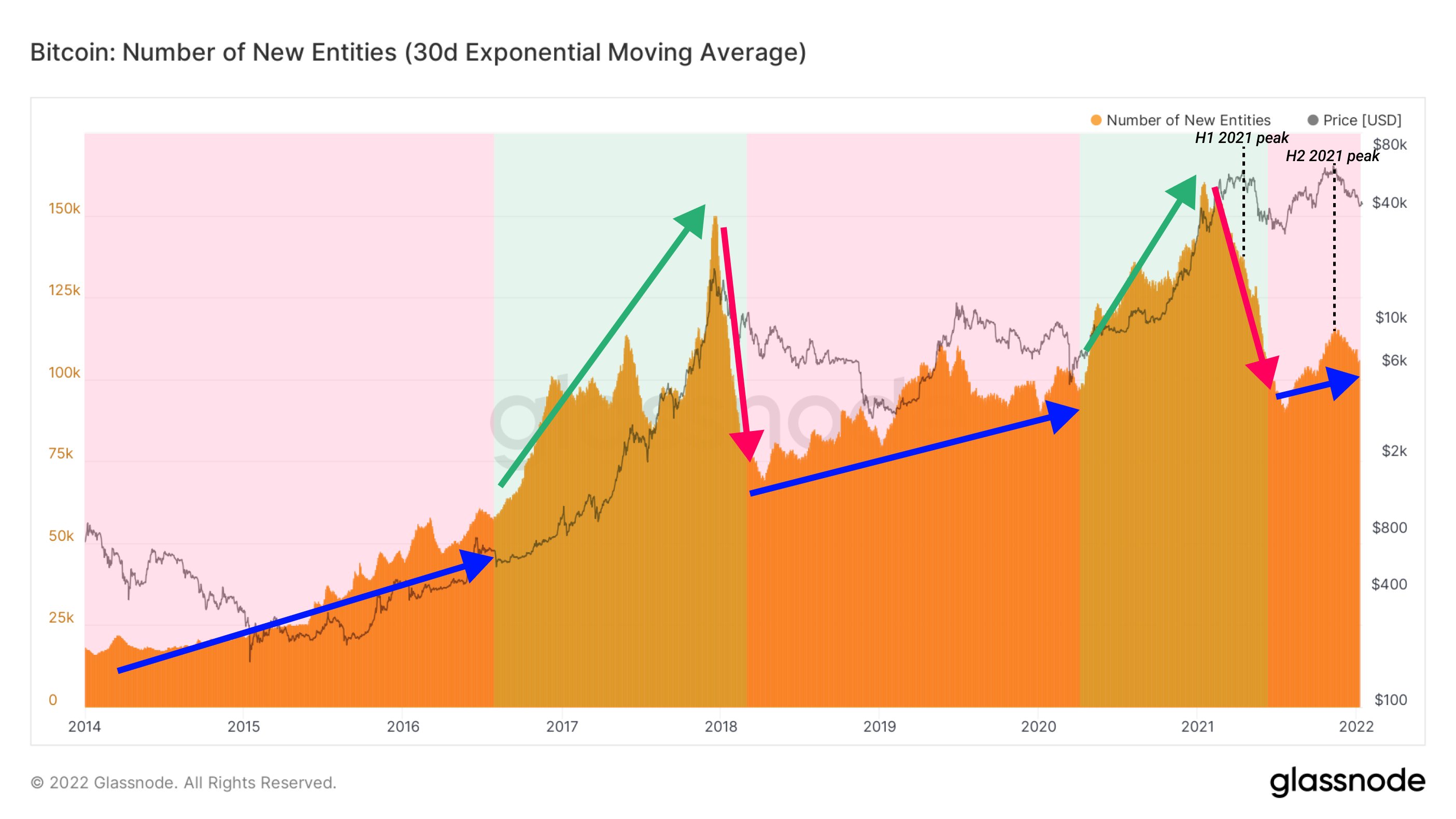 The data underscores how the average investor has all but forgotten Bitcoin, even as it swept new highs and institutional activity remained strong.

Interest levels from Google users adds to the trend, with search rates for “Bitcoin” worldwide at levels previously the norm in December 2020.

Miners, although being far from underwater at current price levels, are also getting less income from transaction fees than at any point since late 2020 — just 1.08%.

“This is an indicator that retail is not in yet… Although price is really similar to early 2021 When retail?” Twitter-based on-chain analyst Blockwise queried this weekend, presenting further Glassnode data. 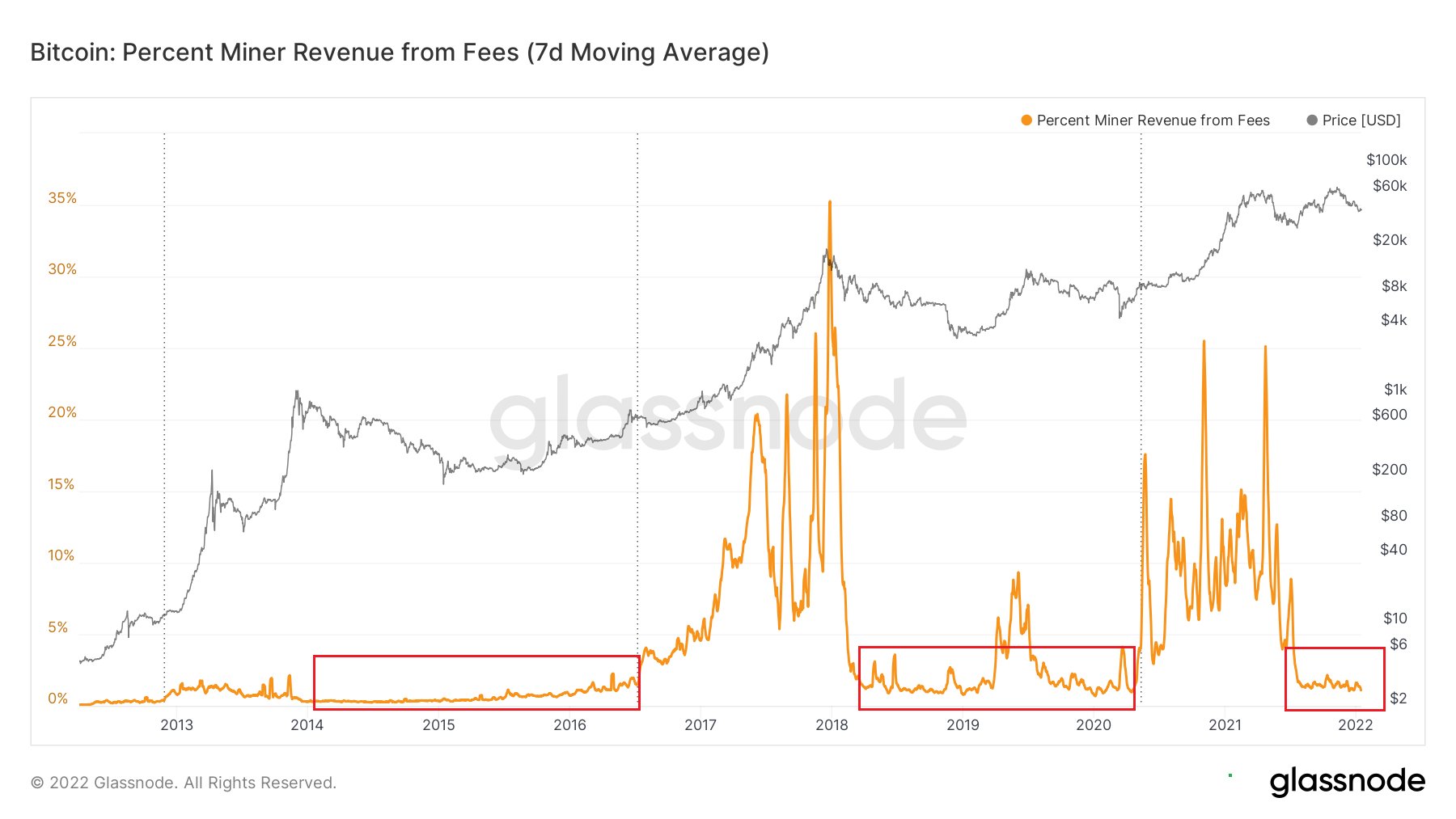 Bitcoin’s new year “extreme fear” continues — and if on-chain behavior is anything to go by, it’s set to remain the dominant sentiment force.

According to the Crypto Fear & Greed Index, which measures market sentiment via a basket of factors to assess just how traders are likely to act at a given price point, things have rarely looked more bleak.

Since late December, the Index has characterized the status quo as “extreme fear,” and so far, no price shifts have managed to alter it.

Similarly, data covering BTC moved at a profit or loss shows timidity among transactors, with precious little profiteering to be seen.

Such behavior is common during price dips and was seen last year during the summer as BTC/USD fell and bottomed at around $30,000.